PianoArc was featured at the Pre-Party for the 2015 Edison Awards at the Village Underground in New York City.  This event sponsored by our amazing law firm – PIB law.  Check out this capture by photographer extraordinaire Ashley Neuhof during the opening number:

The gig featured Brockett flanked by two drummers along with bass/vocals.  A magical and memorable moment as the latest PianoArc design moved from production to the stage.

The latest PianoArc unit features a more portable, folding design – a process that took months to engineer and maintain the precision that performers expect. 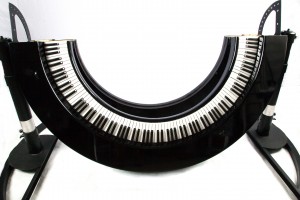